From jwiki
Jump to: navigation, search

Asakusa Ryokan Toukaisou (浅草旅館 東海荘) (Google Maps) is a hotel located in Asakusa (浅草), in the Taito ward (台東区) of eastern Tokyo. The staff speak English and it is popular with foreigners.

Asakusa is a cultural centre, with a large temple complex and vibrant shopping area. It is also well placed to access other popular destinations.

Asakusa is served by several railway/subway lines and bus routes.

The Tsukuba Express has an underground station only a few minutes walk from Toukaisou. The line terminates two stops away at Akihabara in one direction, and at Tsukuba in the other. At Akihabara you can change to the Yamanote Line that circles Tokyo, as well as lines for Kawasaki and [Yokohama].

There is a Tokyo Metro Ginza line station around five minutes walk from Toukaisou. The closest stop is Tawaramachi. The Asakusa stop is actually a little further away, about 10 minutes by foot. This line goes to Ueno and Shibuya, as well as of course the high end shopping district of Ginza.

Around 10 minutes walk away is Asakusa Station, which provides access to the Sky Tree (two stops) and [Haneda Airport].

Numerous buses pass along the main road only three minutes walk from Toukaisou, including a free one that takes tourists to the Maneki-neko lucky cat shrine. Taxis are available 24/7 too.

Another way to get to Toukaisou from Narita Airport is via the Keisei Skyliner train. The train runs from Narita to Ueno. At Ueno change to the Ginza subway line, going in the direction of Asakusa. Go two stops and get off at Tawaramachi (田原町) (G-18), although it's not too far to walk if you end up at the terminal in Asakusa.

Finally, you can also get the Narita Express train, or NEX, from the airport to Ueno, and then take the Ginza subway line.

The easiest way to get from Haneda to Toukaisou is via the Keikyu line, which takes around 55 minutes to reach Asakua station. Google Maps link. From there take exit A2 and it's a 10 minute walk to Toukaisou. 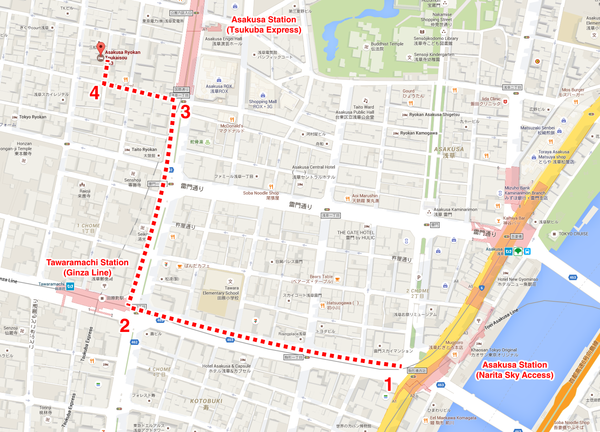 Once you reach Asakusa by train, you can walk to Toukiasou quite easily.